THANK YOU FOR YOUR SUPPORT


I started writing this blog over 10 years ago and will be continuing to write about my time in East Cleveland here at:

I hope you continue reading and commenting here.  Your support of this blog over the past decade has resulted in 58 followers, 247 comments and 74,000 hits.  I am grateful for your support.

I have recently decided to write a series of essays about places I have worked and the interesting buildings in which I worked.  Many of those essays do not relate to East Cleveland other than the fact that I am a product of East Cleveland and its schools.  One exception to that is my first essay in that series: “My work history before graduating from Shaw High School”.

Future essays in this series will discuss jobs and buildings in which I worked, all of which were in Cleveland , except for the first one in Chicago including:

I hope all of you will continue following this blog as well as my new blog: robertdreifort.blogspot.com.  You can become a follower and post comments on both blogs.  I will continue to respond to you on both blogs.  All my memoirs about East Cleveland will be posted here.  All memoirs and opinions of general interest will be posted at robertdreifort.blogspot.com.

Posted by Robert Dreifort at 2:40 PM No comments:

That Ride to Nottingham

Recently, while examining a copy of the oldest Shaw High School yearbook known to exist (1905), I discovered in The Annual’s literary section an unsigned poem by a student describing a 1905 sleigh ride of some Shaw students from East Cleveland to the nearby village of Nottingham.  Nottingham was the area on the east of Collinwood, where the New York Central Railroad’s tracks and St. Clair Avenue cross Dille Road and E. 185th Street, just  north of the intersection of Euclid Avenue and Chardon Road.

The poem is typical of its day and high school poetry in general.  But it captures an evening’s fun among the Shaw High School crowd at the turn of the last century.  Before I share the poem, That Ride to Nottingham, allow me to set the scene for you so that we can try to imagine what sleigh riding was like in those long-ago days.

In 1935, Charles Asa Post, who grew up in Doan’s Corners (E. 105th and Euclid area) published a nostalgic look back on the subject of sleigh racing in Cleveland from about 1875 to 1915.  He described a sport which has vanished, and which must have been fascinating and thrilling to participate in or just observe.  For his book Post solicited old-time friends for their memories, and Charles A. Otis, a prominent industrialist, once called “Mr. Cleveland,” wrote back on the subject of, not sleigh racing, but rather the pleasures of sleigh riding, especially as it was experienced by young men and women out for an evening’s ride to a roadhouse for refreshments, before returning to their homes on Millionaires Row.  Who wouldn’t enjoy such an evening’s fun?

Excerpts from  Those Were The Days:  When Hearts Were Kind and Sports Were Simple”

“It is a joy…to recall (those) times.  I can see them now—the beautiful horses, the gallant gentlemen in furs and the excitement of the crowd as they went by.”

“I recall the sleigh rides to Silverthorn’s with four horses and bobs.  We would sit close to our best girl friends, and this wasn’t quite as close as today.  The girl was usually wrapped in yards of material that surrounded ladies in those days.  We had a great time.  Later came the Roadside Club sleighing parties.  Silverthorn’s was near Lake View Cemetery.  I think they called this tavern the Home Stretch.  Just before the end of horses and sleighing, I had several four-in-hand sleigh rides.  I would like to have these boys with heaters in their cars know us iron men of the ‘90s.  Four ribbons on a zero night and driving a crowd of singing, beautiful girls and boys out about fifteen miles in the country.  Those were the days!”

“Every turnout had to be equipped with bells, as that was the law.  Sometimes a horse would have a string of bells around the neck or a long string around the body close to the pad through which the reins were passed and the check-rein was hooked, or there would be standing up from the pad at the top of the horse a metal frame containing from five to ten small bells, and sometimes there would be horsehair plumes; but the racing cutters had the bells fastened on the under side of the shafts or thills, so that they would be out of the way and not be cumbersome or bother the horse.
“Then there were the beautiful big two-horse sleighs, and the driver in some cases would be way up high in front with a big fur cap pulled down over his ears and with a big black bear fur cape around his shoulders, and big fur gauntlet gloves.  Sometimes there would be a footman alongside of him similarly dressed.  Down the body of the sleigh would be two wide seats facing each other, and over the backs of these seats would be beautiful fur robes of black or brown bear, wolf, or fox, and the occupants would sit on these robes, and then have other luxuriant fur robes to wrap around them to keep warm.  Also there were foot warmers, which were charcoal burners in metal cases, covered with heavy carpet or felt.  These sleighs were as ornate in their day as the automobile is today.”
“The harnesses of the horses were very showy.  They were highly polished brass buckles, rings, rosettes for the bridles, or they might be silver plated.  I do not think there was much nickel plating in those early days, everything was silver plate.  The horses would have plumes on their bridles and the whole outfit was certainly gorgeous”
“Some of the single sleighs or cutters would have bodies like a sea shell, others would have bodies like a swan, and then again there were the plain, modest cutters of people who believed in simplicity.”
* * * * *

In That Ride to Nottingham some Shaw freshmen of 1905 organized and carried out an evening’s sleigh ride from some point probably west of Windermere.  To get to Nottingham from Windermere the students most likely traveled east out Euclid Avenue to Dille Road and then turned left.  I have no idea where the dance hall was that they had as their goal that night, nor the Y that the writer refers to.  A YMCA?  Where?  The “car” means a streetcar, and beginning in 1905 there was a slow, single-track “dinky” streetcar from Lake View to Chardon Road which the faint-of-heart students could use instead of riding in a sleigh.

Notice that the participants are Shaw High School freshmen and sophomores (grades 9 & 10).  And yet even at that age the boys were capable enough with horses and sleighs that mom and dad would let junior take his best girl out in their sleigh for a long winter evening’s sleigh ride.

For those who remember and loved East Cleveland for its cold winter nights filled with snow, stars, and good friends from Shaw High School,  I say,  Let’s ride…Away to Nottingham! 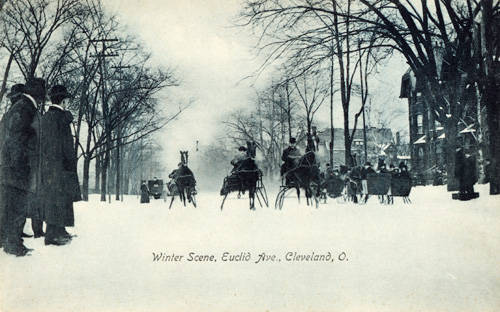 That Ride to Nottingham

Our Freshman class stole out one night
To have a sleigh ride fine.
The ‘phone did let the Sophies know
Our meeting place and time.
When up the street we boldly drove,
Us out they tried to cram,
As jingle, jingle went the bells
Away to Nottingham.

The Sophies failed to pull us out,
But “Kenneth’s little brother”
Dived boldly into the bob,
And oh, he was a bother.
With sticks and fists the faces of
The others we did lam;
But jingle, jingle went the bells
Away to Nottingham.

The other Sophies took a car,
and met us at the Y.
But, like all other children wise,
They did not want to die.
They saw the fate in store for them,
And scared, they homeward ran;
While jingle, jingle went the bells,
Away to Nottingham.

At Windermere, unwillingly,
Jay left his hat and shoe.
To put him out would make him sick,
So this we did not do;
And at the pleading of the girls,
We left him in the jam;
Still jingle, jingle went the bells,
Away to Nottingham.

To Jay we showed great clemency,
Who bootless was and cold,
and in the bob we let him stay
But he got out when told,
And through the snow to get his shoe,
And catch a car, he ran,
As jingle, jingle went the bells,
Away to Nottingham.

At last the dance hall we did reach,
And there we had much fun,
In games, and dances, and the like,
Till night was nearly done.
With jolly stuff to eat, and drink,
We certainly did cram;
But not a single bell was heard
With us in Nottingham.

With horns, and howls, and songs of joy,
Toward home we gaily sped.
The friendly Y of Sophs was bare;
Friend Hank had gone to bed,
The Sophs had all departed, each,
As gently as a lamb,
When jingle, jingle came the bells,
Back home from Nottingham.

It was the custom at Shaw and other high schools in those long-ago days to publish in the yearbook  many student-written essays and poems.  Thus That Ride to Nottingham was published in the Shaw yearbook for 1905-1906.  In the 1907 Annual an unsigned student essay entitled The Junior Bob-Ride appeared, giving a prose account of that year’s sleigh ride.  While it’s unknown when this delightful custom began, these school-sponsored and chaperoned sleigh rides aren’t mentioned in any Annuals after 1907.

“Early on a chilly evening in January, the discordant notes of a horn, jingling of sleigh bells, and cheery shouting, broke the stillness of East Cleveland.  Ordinarily such a noise would have aroused the peaceful East Clevelanders to growls and muttered cuss-words.  But on this occasion they merely said, ‘It’s those Juniors,’ and smiled.”
“It was, indeed, the Junior class of Shaw, bound on their annual bob-ride.”
(After gathering) “…the class, the chaperones, the milk, and quantities of eatables proceeded to the waiting bobs, and climbing in, set out for Euclid.”

“After a long, and edifying ride, the party arrived at the thriving (?) village of Euclid.  When the town hall was reached, the class, chaperones, (and) the quantities of eatables piled out.  On entering the hall, the class found a roaring fire….”

“Then the class piled into the waiting bobs, taking care, however, to get both chaperones into the smaller bob.”

“The winter moon shed its soft light upon the homeward bound Juniors, seemingly having a very softening effect upon the occupants of the larger bob, while in the other, no such effect, wonderful to say, was observed.”

It seems that high school students, whether out on a nighttime sleigh ride or hay ride, haven’t changed much since 1907.

This picture is from the 1905 Shaw Annual.  These are the students who went on "That ride to Nottingham in 1905.  Kenneth Ingersoll, one of the students mentioned in the poem is standing fifth from the left.


They went to Nottingham in 1906 on the Junior Bob Ride.  Two of these boys are mentioned in the poem "That Ride To Nottingham":

Robert Dreifort
Born in East Cleveland and lived there from 1940 to 1963. Attended Prospect Elementary, Kirk Jr. High and Shaw High School. Graduated from Shaw HS June,1958. Received a Bachelors degree from Western Reseve Uuniversity and a Master of Public Administration Degree from Cleveland State University. Worked in Government for 20 years followed by 20 years with Cleveland Clinic and Case Western Reserve University as Department Administrator. In addition to East Cleveland, I have lived in Cleveland Heights, Shaker Heights and now in Beachwood, Ohio.